Home > Learning Center > Substance Abuse, Substance Addiction > Alcohol and Honesty
Are You on Your Mobile Phone? Click here for 2800+ mobile optimized, self help and self growth articles. 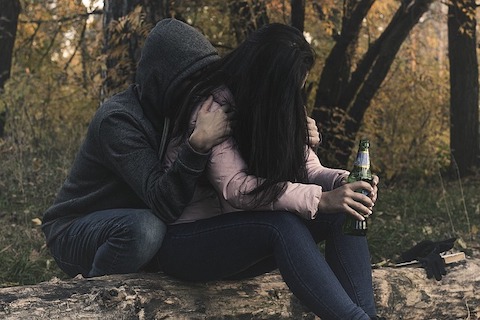 Irene, in her late 40s, had been in an out of treatment centers for years before consulting with me. When in treatment, she was fine, with no desire to drink, but once she returned home to her husband, Frank, and two adolescent children, it didn't take long before she was back to drinking. Even though she faithfully attended AA meetings, she could not stay sober once she returned home. She loved her husband and children and could not understand why she could not stay sober at home. Each time she went back to drinking, she would hate herself for her weakness, seeing herself as a deeply flawed, defective person. She believed that the problem was entirely hers - that her family had nothing to do with it.

"What changes regarding how you feel when you go home?" I asked her on one of our phone sessions.

"I feel trapped. I feel controlled and suffocated, like I can't be myself."

"What happens that make you feel so trapped?"

"I don't know. Frank is such a sweet and wonderful man, and I know that he really loves me. And I love him. I don't get what is happening that makes me feel so agitated and trapped."

A Conjoint Session Revealed The Problem

"Irene, in my experience, Frank is not hearing you at all and is trying to talk you out of your feelings. Does this happen often?"

"All the time," she answered. Frank immediately went into denial, saying that is not what he was doing and that it certainly didn't happen all the time. His voice was very firm and parental, as if he really knew what he was talking about. Irene went silent.

"Irene, what are you feeling right now?" I asked.

"I feel like I'm going to explode. I just want to get away and have a drink. I feel sick to my stomach."

Frank actually started to attempt to talk her out of these feelings and then stopped. "Do you really feel that way?" he asked.

"Yes, and I feel this way much of the time we are together."

"I am telling you right now and all you want to do is tell me that I am wrong and shouldn't feel this way!"

In subsequent sessions with Irene, I helped her to articulate all the things that Frank did that made her feel trapped and invalidated - and there were many. He would grab her breasts, no matter how many times she had told him that this didn't feel good. He would get judgmental when she wanted to spend time with a friend that he didn't like. He would even try to control what she wore. Invariably, Irene would cave in - and then drink.

Learning To Speak Up For Herself

Irene and I worked on her learning to speak up for herself and take loving action for herself - disengaging and walking away when Frank was discounting her, pulling on her, or judging her. She had always been afraid to hurt his feelings with her honesty because he would be angry and withdraw for days when she did manage to speak up. I encouraged her to tell him that she would no longer be around him when he was angry and withdrawn, and then to spend time with friends, go on a little vacation with her kids, or pursue her hobbies when he acted out.

Irene devoted herself to practicing Inner Bonding and learning to take loving care of herself. She joined the Inner Bonding membership community and received the support she needed to learn to stand up for herself. Once Irene started to tell her truth and take action on it, she found herself not wanting to drink. She was able to make the connection between her drinking and her abandoning herself in the face of Frank's controlling behavior.

Because Frank does love Irene, he was willing to address his subtle and overt controlling behavior. While it did not happen overnight, Irene's drinking is no longer a problem for her.