Home > Learning Center > Happiness, Healing, Self-Esteem > Beyond the Authority of the Critical Voice
Are You on Your Mobile Phone? Click here for 2800+ mobile optimized, self help and self growth articles.

Beyond the Authority of the Critical Voice

Do you listen to your inner critic as if it is the voice of authority? Learn how to move beyond these false beliefs and into truth. 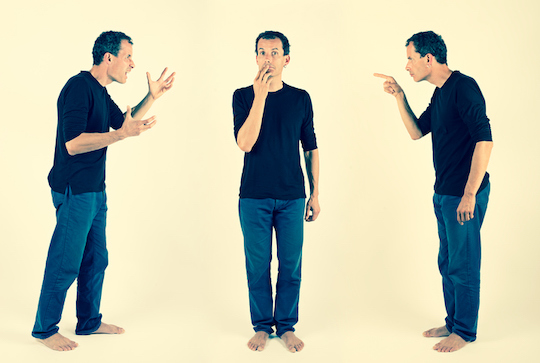 Each of us has an inner critic. There is no way to grow up in our society without having developed this inner critical voice - which comes from parents, teachers, peers, the media, and from our own conclusions.

The problem is that this inner critic sounds like a voice of authority, when in reality it doesn't know what it is talking about. It is a voice based on beliefs that have been handed down through generations but that have no basis in fact.

How often has this authoritative voice said to you:

"You can't do it. You are inadequate."

"You are stupid and ugly."

"If he (or she) rejects you, it is because you are not okay."

"You had better do it right. If you don't, everyone will know that you are a fraud."

"It is NOT okay to make a mistake."

The Illusion of Authority

This inner critic speaks with such a strong illusion of authority that it is tempting to believe what it says. Yet it knows only lies. It knows nothing of who you really are.

When this voice is criticizing you, it is criticizing the "you" that it thinks you are - your ego wounded self. The critic, having come into being to help you survive and protect you from rejection, long ago decided that who you really are is not good enough. When you experienced criticism or rejection from the important people in your life, you likely concluded that you were being rejected because you weren't good enough or lovable enough or worthy enough or smart enough or attractive enough...and so on. You may have had no idea - when you were being judged or rejected rather than loved and accepted - that it had nothing to do with you. You probably had no idea that you cannot CAUSE another person to be critical or rejecting, or to be loving and accepting. You likely had no idea that others' behavior is not under your control.

If you believed that you were causing others to criticize or reject you, you may have decided that who you really are is not good enough. So, you started to criticize and reject yourself as you attempted to create a "self" that would be loved and accepted. The inner critic - your ego wounded self - is the self you created. You came to believe that if you criticized yourself enough, you would make yourself into an acceptable person.

None of this is True

There never was anything wrong with your true self, your essence, your soul. It was, and is, a perfect expression of the source of which we are all a part.

Who you are - what is truly worthy, lovable, and valuable about you - is your essential self and your inherent ability to love. Not how you look, not how smart you are, not how much money you have or how big your house is. Your true self is an individualized expression of the divine - which is Love.

Next time you hear the authoritative voice of your inner critic, instead of giving that voice credence, stop listening and move into an Inner Bonding process. Treat that voice with compassion, like a child who acts like it knows everything. Instead of identifying with that voice, open instead to the voice of your true self - the voice of truth coming through you from your higher self.

Do this simply by asking, with a deep desire to learn, "What is the truth?" Your higher self will answer you. This self is the true voice of authority, even though it may be much softer and gentler than the loud voice of your inner critic.

Each time you hear the critical voice, move into Inner Bonding and ask your higher self "What is the truth?" If you take action based on the truth rather than on the false beliefs of your inner critic, you will find yourself feeling much better in so many ways!

Learn to connect with your spiritual Guidance with Unlocking Your Inner Wisdom, A 30-Day at-home Experience with Dr. Margaret Paul.

Perfectionism is a form of control. "If I am perfect, then I can have control over how others feel about me and treat me." Life becomes much easier and more fun when we let go of having to be perfect and allow ourselves to be human.

Perfectionism is a form of control. "If I am perfect, then I can have control over how others feel about me and treat me." Life becomes much easier and more fun when we let go of having to be perfect and allow ourselves to be human. By Dr. Margaret Paul