Home > Learning Center > Communication Skills, Effective Communication > Relationships: The Dance of Victims and Perpetrators
Are You on Your Mobile Phone? Click here for 2800+ mobile optimized, self help and self growth articles.

Relationships: The Dance of Victims and Perpetrators

You and your partner might both be victims and both be perpetrators - both trying to control the other rather than take loving care of yourselves. 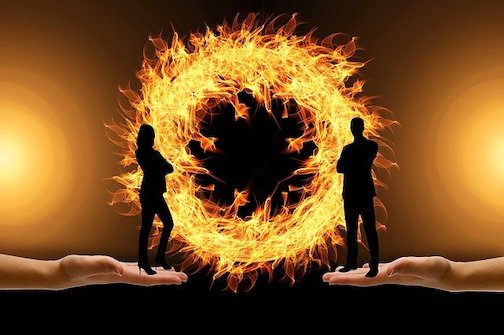 "He is always blaming me for the bad things that happen in his life, and then he tells me it's me controlling him that is making him so angry. He yells at me and puts me down rather than deal with his own feelings. How can I get him to see that he is the one trying to control me? How can I get him to take responsibility for his own feelings rather than keep on dumping them on me?"


Lillian was clearly feeling victimized by her husband Rob.

It is always amazing to me when a person who is blaming their partner for blaming them does not realize that they both are trying to control each other - that they are both blaming.

"Lillian, when you are trying to get Rob to see what he is doing that you don't like, aren't you also trying to control him?"

"Oh…..Oh, I never thought of it that way. I just thought that if I could get him to see that he is blaming me, maybe he would stop and deal with himself."

"But aren't you blaming him for blaming you?

"Yes! Anytime you blame him for your feelings and trying to get him to see what he's doing, you are trying to control him. The two of you just do it differently. He does it with his anger and meanness, while you do it with your logic and explanations. He gets angry at your debating, and you debate when he gets angry. It is a circle between you - each of you reacting to the other with your own ways of trying to control."

"Lillian, you are about to do it again. You want to complain about him rather than look at what you are doing and what you need to do differently to take loving care of your own feelings. Your eyes are constantly on him - on how he feels and how he acts and what he needs to do differently. Because he is the angry one, he seems to be the perpetrator and you seem to be the victim. But he could just as easily claim that you are the perpetrator with your constant nagging at him, which he feels victimized by."

"But I just want him to hear my feelings - to understand how his behavior makes me feel."

"Aren't you wanting him to understand your feelings so that he will change? Isn't telling him your feelings a way to make him responsible for your feelings? Isn't this just another form of control?"

"Lillian, until you get your eyes off him and think about how to take loving care of yourself in the face of his anger, you will continue to feel like a victim and try to control him into changing. It hasn't worked for the 20 years of your marriage. What makes you think it is ever going to work?"

"I didn't know what else to do. I've been so miserable. I thought the only other thing I could do is leave and I don't want to leave. I love him."

"Yes, I know you love him. So leaving is not an option and neither is changing him. It's time to control what you can control, which is you. I suggest that when he is yelling at you, taking loving care of yourself would mean disengaging - not getting into it with him while keeping your heart open - and go do something you enjoy doing. Are you willing to practice doing this?"

Today, try an experiment. Focus all day on everything you are grateful for, and choose to have compassion rather than judgment for yourself and others. At the end of the day, notice how terrific you feel!

Today, try an experiment. Focus all day on everything you are grateful for, and choose to have compassion rather than judgment for yourself and others. At the end of the day, notice how terrific you feel! By Dr. Margaret Paul