Home > Learning Center > Relationship Advice, Love Advice > Can't Say "No" to People?
Are You on Your Mobile Phone? Click here for 2800+ mobile optimized, self help and self growth articles.

Are you afraid to say "no" to others? Discover where you got this fear and how to move into personal power and emotional freedom. 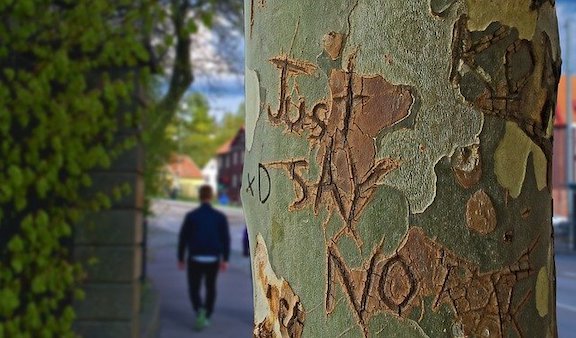 What are you afraid of if you say "No" to people? Here are some of the things my clients have told me regarding their fear of saying no:

"I'm afraid of hurting their feelings. Then they will get angry at me and I will feel like a bad person."

"I'm afraid of ending up with no friends. People will reject me if I say no."

"I'm afraid that my partner will get angry and withdraw his love."

Walls instead of "No.

However, when you are afraid to stand up for yourself and say "no" when saying "no" is what is in your highest good, then you might put walls around yourself to avoid having to say "No."

For example, Janice keeps herself 50 pounds overweight because it makes her feel safe from men approaching her for sex. A beautiful woman who was sexually abused as a child, she never learned that it is her responsibility to take care of her own feelings and safety, rather than take responsibility for others' feelings. She is so afraid of hurting a man's feelings by saying "no," that she would rather attempt to protect herself by being overweight than have to face saying "no."

Ron is terrified of being taken advantage of. He believes that if he is open hearted, he will be vulnerable to being used and taken advantage of by others. Because he doesn't want to face his fears of rejection should he say "no" to his family, his friends, his co-workers, or even to a persistent salesperson, he keeps himself safe by being closed, hard, and aloof. He believes that by being unapproachable, he is safe from being taken advantage of. However, he then ends up experiencing the very rejection he is afraid of, because people are put off by his aloofness. Not only that, but keeping himself closed and hard cuts him off from connection and fun with others. All this can change for Ron if he learns to take responsibility for himself by saying "no" when this is what is in his highest good.

Gayle finds herself going along with want others want her to do, and saying the things that she thinks others want to hear, because she is so afraid of others' anger at her. But giving herself up feels awful to her, so after a while, she gets angry and shuts down as a way to protect herself from losing herself. She spends all this energy giving herself up, and then getting angry and shutting down, to avoid having to say "no."

As a child, did you experience the heartbreak of rejection or even of abuse if you said "no" to a parent, a sibling, a friend or relative? Did you learn that either going along with what someone wanted, having a temper tantrum, or shutting down and numbing out were ways to avoid the feeling of heartbreak at not being able to say no?

Protecting Against The Heartbreak of Others' Lack of Caring

It is very painful for all of us when someone just wants what they want and doesn't care about what we want or what we feel is right for us. It is painful when others want to use us or take advantage of us. So you might be protecting yourself against the heartbreak of knowing that another doesn't care about you by giving in, getting angry, gaining weight, or shutting down.

But the irony of this is that when you try to avoid the heartbreak of feeling another's uncaring behavior, you are not caring about yourself. You are abandoning yourself when you give yourself up or close your heart to avoid feeling rejected. By avoiding others' rejection, you are rejecting yourself, which causes much anxiety and depression.

Moving into personal power and emotional freedom means being willing to take the risk of others' uncaring or rejecting behavior and learning to manage the heartbreak of this, rather than continue to abandon yourself.