Home > Learning Center > Parenting Style > Authoritarian, Permissive, or Loving Parenting
Are You on Your Mobile Phone? Click here for 2800+ mobile optimized, self help and self growth articles.

Our society swings back and forth between authoritarian and permissive parenting. Discover why neither works well, and what does work. 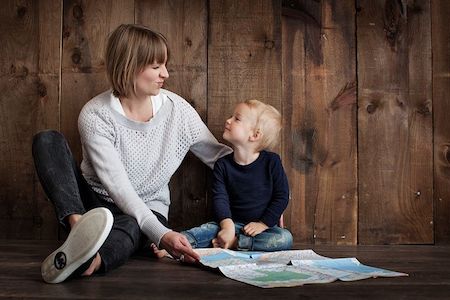 Angie was brought up by rigid authoritarian parents, who kept her on a tight leash. They rarely considered her feelings about anything, showing a complete lack of empathy and compassion for her feelings and desires. If she came home five minutes late from school or from an activity, she was punished. Yelling and hitting were their favorite forms of punishment.

Angie was a good girl. She did well in school and did what she was told, but she was often sad and lonely, and never felt important. When she married and had her own children, she knew that she didn't want to treat her children the way she had been treated. She wanted to consider their feelings and needs. She wanted them to feel valued and important.

Angie was Loving, but...

Angie was a very loving mother. She spent lots of time with her children, playing with them, listening to them, and giving them much affection and approval. However, because it was so vital to Angie that her children feel valued and important, she often put herself aside and gave in to their demands. Because Angie had never felt important, it was easy to put herself aside. She actually believed that her children's feelings and needs were more important than hers. As a result, Angie swung the other way from her own upbringing and became a permissive parent.

The consequences for Angie of authoritarian parenting, was that she didn't value herself. The results for her children of permissive parenting were that her children grew up with entitlement issues, thinking they were more important than others, and often not being caring and respectful toward others.

To Be a Loving Parent, Learn to Love Yourself

As much as we want to be loving parents, unless we have done our own Inner Bonding work to heal our own deep fears of rejection and domination, we will automatically be acting out of these fears without being consciously aware of it. If you grew up with fears of rejection and/or domination, you will automatically protect against these fears in your relationships with your children. You may find yourself trying to control them out of a fear of being controlled or rejected by them. Fears of rejection can manifest in your parenting through trying to control your children with anger, or through trying to control their love through giving yourself up to them. Fears of domination can manifest through controlling them with anger or violence to avoid being controlled by them. Insecurities can manifest through attempting to get your children to perform in the way you want, in order to define your own worth.

In one way or another, whatever is unhealed within you will surface in your behavior with your children. Raising healthy children means first healing your wounded self  - the part of you that is run by your fears and insecurities, and your desire to protect against rejection and domination.

Our society has swung back and forth between authoritarian and permissive parenting; the result of both is far less than desirable. We have only to look at the number of people taking antidepressants and anti-anxiety drugs, as well as the number of alcoholics and drug addicts, and the rise of crime and the number of people in prisons, to know that neither method works to raise healthy individuals.

Perhaps it is time to accept that we need to be in the process of healing ourselves before becoming parents.