Part 4 of a 5-part series, giving an example of what it looks like to learn about your relationship issues with the help of your spiritual guidance. 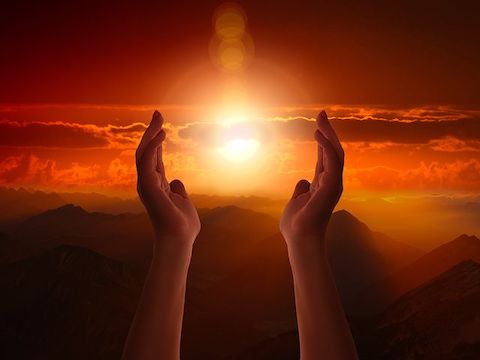 In Part 1 of this series, I described the fears of rejection and engulfment that underlie relationship problems.

In Part 2 of this 5-part series, I offered a simplified version of the Six Step healing process of Inner Bonding:

1. Willingness to feel your feelings and take responsibility for them
2. Choose the intent to learn
3. Dialogue with the feelings
4. Dialogue with your Higher Power
5. Take loving action
6. Evaluate the action.

Part 3 described what it means to be in Step Two - choosing the intent to learn - using Joan's and Justin's marriage as an example.

Part 4 continues with Joan and Justin, describing how Joan uses Steps 3 and 4 of Inner Bonding to deal with the issues in her marriage.

In Step 3 of Inner Bonding, Joan investigates her beliefs and behavior that is causing her pain. From a place within of compassion and curiosity, Joan dialogues with her feelings of anger, aloneness, fear and resentment. Imagining that she is a loving parent speaking with a hurting child, Joan asks her inner child questions:

Loving Adult Joan: Little Joanie, what am I thinking or doing that is causing you so much pain?

Inner Child Joanie: You keep telling me that Justin doesn't love me anymore. You are scaring me so much. Whenever Justin works a lot, you tell me that he is working because he doesn't love me anymore - that if he loved me, he would spend more time with me. You just keep telling me that there must be something wrong with me because Justin works a lot.

Now Joan moves into Step 4 - Dialoguing with her Higher Power/Higher Self. Joan imagines her personal concept of Spirit - God, Goddess, her own Higher Self, an inner mentor or teacher, or a spiritual guide.

Joan asks her Guidance: What is the truth about the belief that if Justin works late, he doesn't love me?

Joan relaxes and opens, moving out of her thinking mind and allowing the information to come through her from her Guidance. This Guidance is always here for us and we can access the information when we are open to learning about the truth and about loving action toward ourselves, and we are eating clean, non-processed food to keep the frequency of our body high enough to access our guidance. It takes some time, but eventually Joan receives the following information:

One way we know what is true and what is a lie is how it makes us feel.

Joan asks her Guidance: What are the loving actions toward myself? What actions would be in my highest good?

Higher Guidance: Instead of focusing on what Justin is doing and how much time he is spending with you, focus on what would be fun for you to do when he is late. His being late gives you a chance to catch up with your friends, to read, and to do the creative things you enjoy doing. You can also take the dance class you have wanted to take. You will feel much better when you just take care of yourself instead of making Justin responsible for you. He will want to spend more time with you when he sees you happy than when you are always unhappy and complaining.

In the final section of this series, we will see what happens with Joan as she moves through Steps 5 and 6 of Inner Bonding.